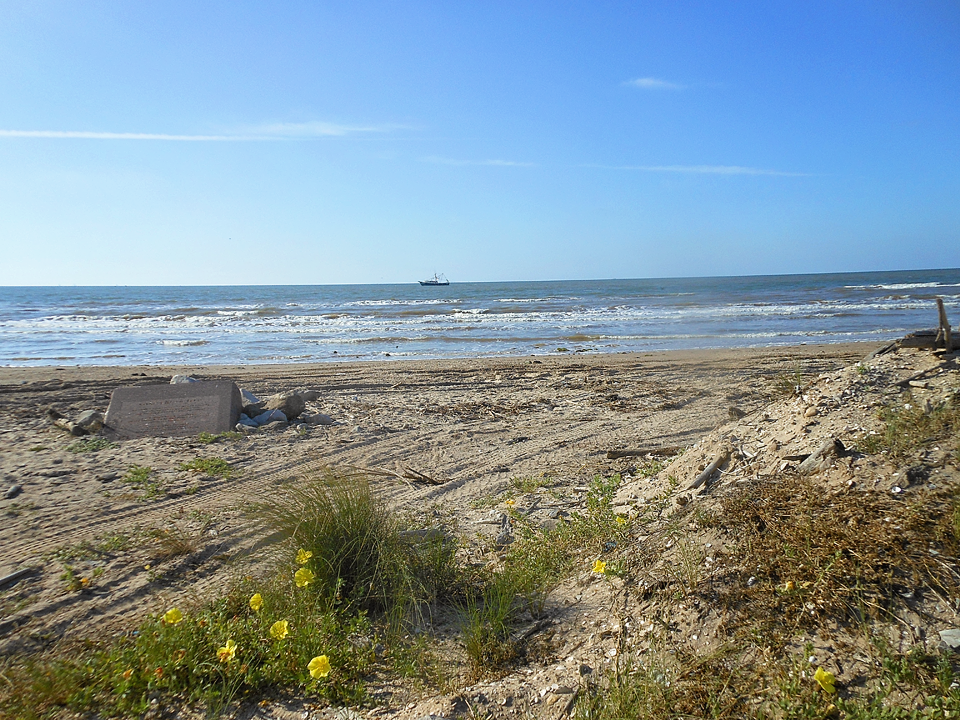 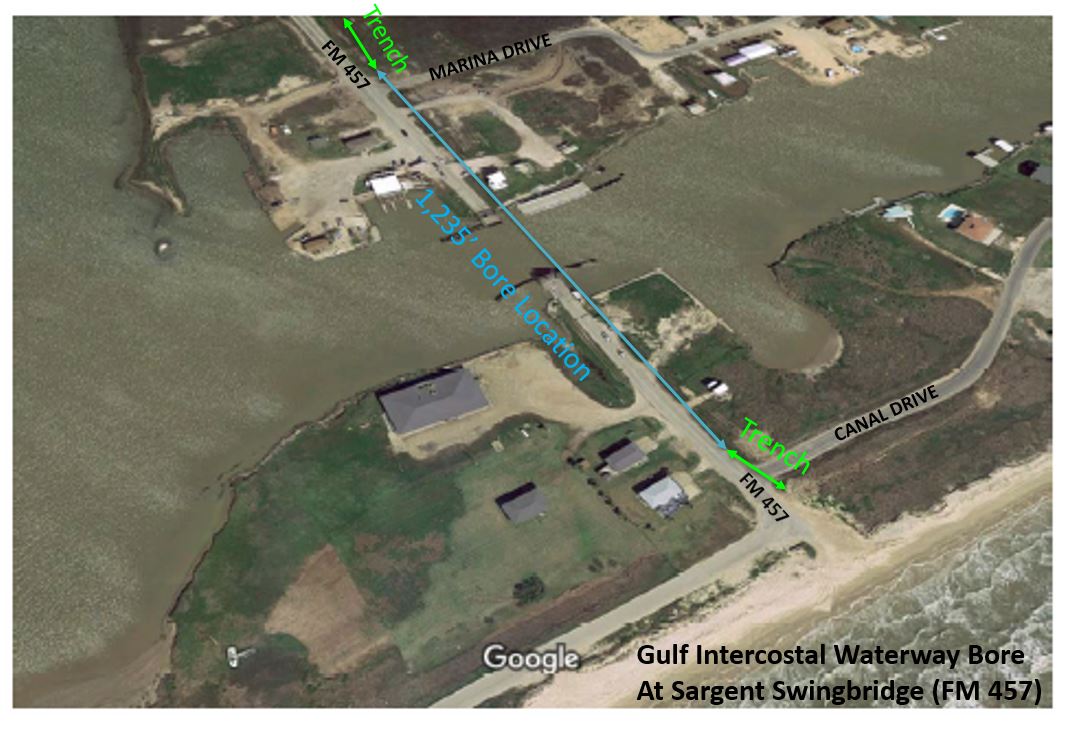 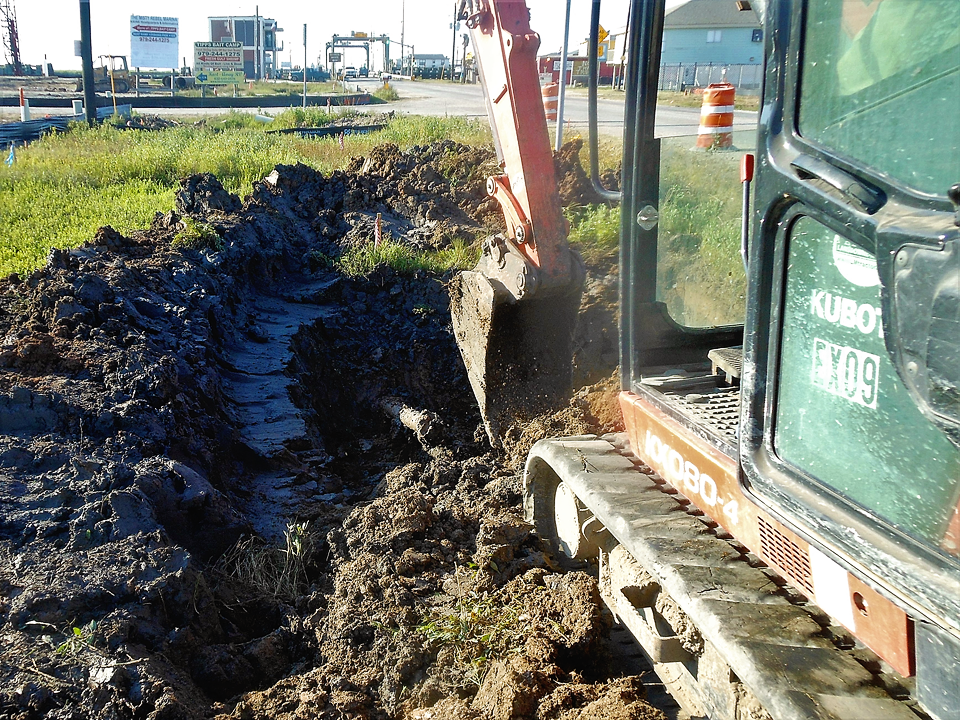 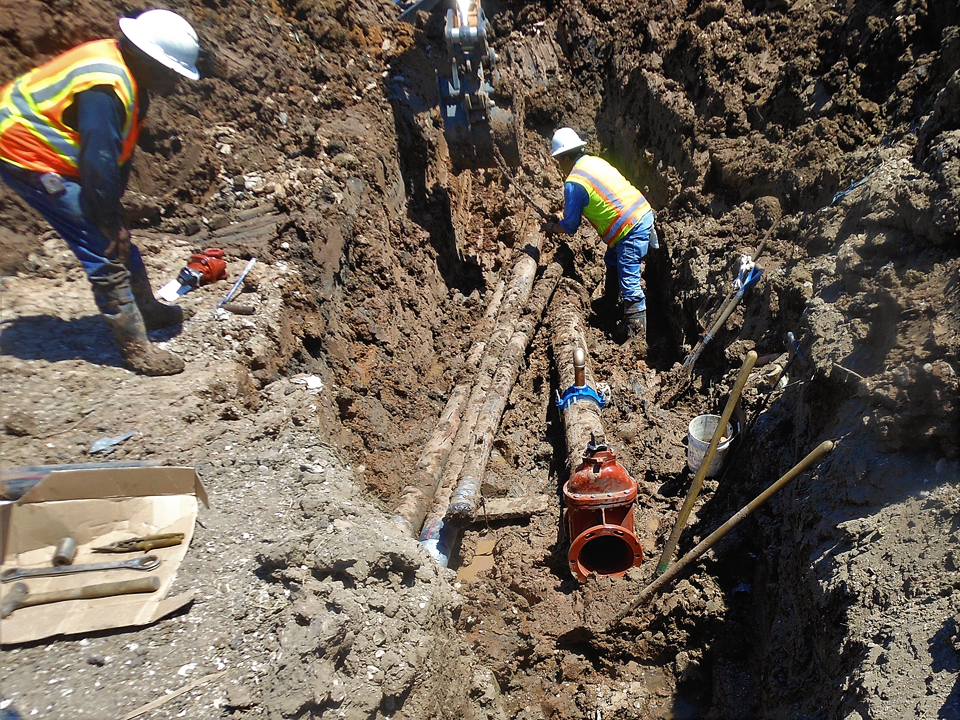 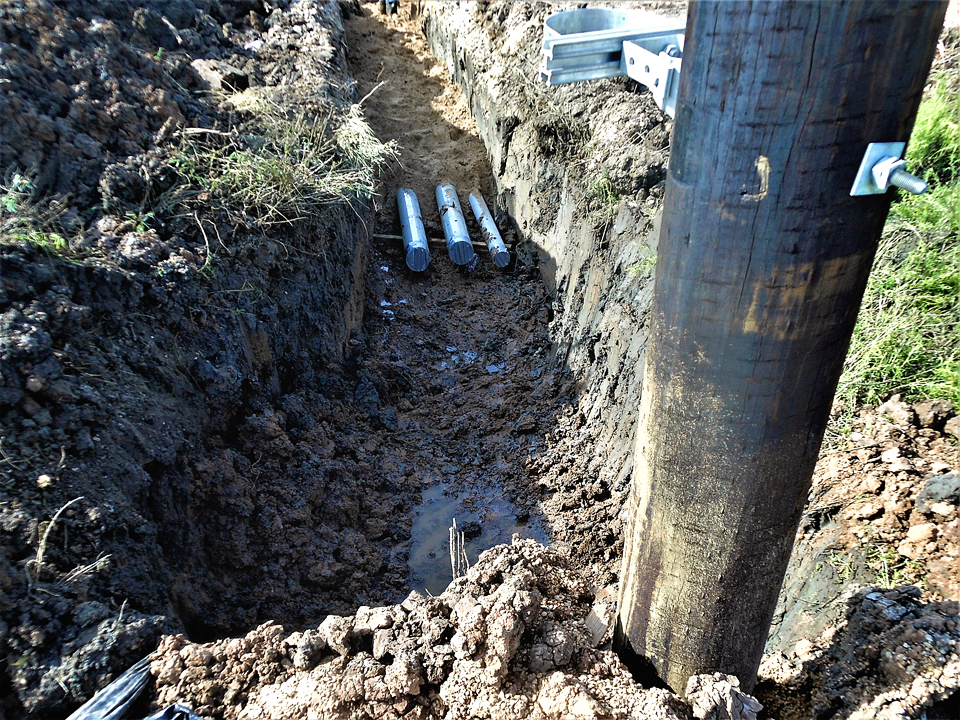 The Texas Department of Transportation (TxDOT) is replacing the floating (pontoon style) swing bridge over the Gulf Intracoastal Waterway (GIWW) at Sargent Beach located in Matagorda County, Texas.  The bridge provides vehicle and pedestrian traffic access to the island and also allows ships and barges the ability to move commerce up and down the GIWW. Beginning in 2018, TxDOT will be constructing a new concrete “corkscrew” bridge to span over the GIWW which will replace the existing swing bridge constructed in 1975.

To facilitate the bridge construction, the existing electric and water facilities in the construction zone needed to be relocated. McCord Engineering, Inc. (MEI) was tasked by Jackson Electric Cooperative. Inc. (JEC) in December of 2016 with designing a bore under the GIWW.  MEI had a great working relationship with JEC and previously completed a smaller GIWW bore for JEC in 2002. This 2002 bore provided the only source for 3-phase power serving the homes and businesses located on the island and would be retired as part of the project.

To complicate the bridge construction project, there was also an existing water well in the path of the new bridge. The water well, owned and operated by the Matagorda County Water Control and Improvement District No.2, (MCWCID2) had to be removed. This well, though, was the main source of water serving the homes and businesses located on the island. MCWCID2 had teamed up with Civil Land Group (CLG) to design a bore under the GIWW which would provide water from an existing mainland water company to the island residents to replace the “to be removed” water well.

Jackson Electric Cooperative. Inc., Matagorda County Water Control and Improvement District No.2, Civil Land Group, and McCord Engineering, Inc. teamed up to design, construct, and complete a single bore under the GIWW. The 30” bore was designed to be located just east of and parallel to F.M. 457 where the road crosses the GIWW near the existing bridge. This single bore included (1) 14” High-Density Polyethylene (HDPE) casing pipe with (1) 8” HDPE water line inside the casing for the MCWCID2, and (2) 6” HDPE conduits and (1) 4” HDPE electric conduits for JEC.  The bore elevation was placed approximately 38′ below sea level to meet the minimum clearance requirements of the USACE for the Intracoastal Waterway canal and bridge structures.

The GIWW and some of the surrounding properties near the bridge are designated as wetlands which are protected areas and under the control of the USACE. MEI and CLG worked closely with The United States Army Corps of Engineers (USACE) and TxDOT on the bore design, utility routing, and the required permits.

JEC, MCWCID2, MEI and GLG would like to thank everyone who participated in the design, construction, retirement, testing and completion of the Sargent Beach Bore as listed below:

US Department of Commerce – National Oceanic and Atmospheric Administration (NOAA)